I will readily and quite officially admit that I have toured at night. Generally, it happens on a day when I feel like putting some distance under the wheels or perhaps I’ve had a late start or a long lunch. Another reason is not finding a reasonable place to camp yet. For all these reasons I carry two bicycle lights, a helmet light and two rear LED lights.

When I ride at night the biggest compliment that can be paid to me is that I glow in the dark. That’s my goal and on the five or six occasions when it’s been voiced it’s made my evening! My bike has reflective tape installed and one item on my criteria list for bags is that they have reflective strips and preferably a place to mount a rear light.

Although touring is the primary purpose of this website this article refers to touring, commuting, joyriding and any other type of nighttime bicycling.

I rely on lights and reflective tape to help me be seen. I have two battery-powered rear LED lights that I always leave in constantly on mode. The batteries wear down faster but I’ve heard that drunk drivers tend to be attracted to things that blink. While I have no idea how true this is I have also discovered that the lights seem brighter when left constantly on.

Part of my battery changing strategy for lights is to change the batteries at different times whenever possible. This way if one light has dead batteries hopefully a second light can still get me home.

On tour, if riding at night I will typically wear the Goretex jacket you see in the pictures above. Sure it’s a little warmer, especially on a hot summer night but the jacket really improves my visibility so a bit of heat is well worth being seen.

The picture shows the lights I use when on tour. All three lights are LEDs.

The Cat Eye is a light that is very visible to oncoming drivers while giving me some light to navigate with. A nice feature is the flexible mounting strap. I typically mount one light on each side of the drop handlebar close to where the brakes are located. This avoids conflict with the handlebar bag while providing a lot of visibility from multiple angles.

The Vistalite is currently my preferred rear and front LED. I carry one front and two rear LED lights on tour. I find the light not only very visible when compared to other models but surprisingly inexpensive as well!

The Petzel headlamp is a fantastic light to have. Mine fastens very quickly, easily and securely to my bicycle helmet when I need it as well as being an incredible light to use when cooking dinner, writing journal entries, reading a book or doing some late-night bicycle maintenance. In addition to the normal clear shield that comes with it by default, you can also obtain other coloured shields like yellow and red.

Jakub riding his bike in simulated dark mode. He rode with his lights off on purpose on an empty and very safe multi-use trail to help pass the message. He normally has the lights on, and fresh batteries and soon he intends to cover the several thousand feet of buckets with reflective tape!

The picture shows Jakub Ner riding his bike with his lights turned off but wearing a typical construction worker's vest.

As you can see in the picture the vest is somewhat visible, the rear light with no power isn’t a great reflector and if you look carefully you can see a small slice of reflective sidewalls from his Schwalbe tires.

He is more visible than many people who ride at night with no lights or reflective tape whatsoever.

Sometimes you hear people mention the extra weight of carrying the lights. Fair enough. I think that my extra lights add two to three pounds to the load.

In exchange for that minor burden, I receive more clearance when cars pass me at night and peace of mind knowing that I am much more visible.

Attaching Lights to the Bicycle

BLT has created a very useful device that you might want to consider taking with you on your next bicycle touring adventure. This device is essentially a large elastic that’s designed to help you attach lights and other items to odd locations on your bicycle.

During my next tour, I am very likely to ride at least some of the time in the dark. Unfortunately, handlebar bags and light mounts typically conflict leaving you with few satisfactory solutions before now.

With this device, I intend to attach the lights to the inside faces of my brake hoods. This will allow me to have good light exactly where I want it while still leaving me with the ability to operate the brakes safely and have a securely attached handlebar bag.

I have used my lights set up this way during several nighttime commutes and so far it’s worked out extremely well for me with no problems. This device can also be used to attach a light to a helmet as well.

Cost is minimal and installation is very simple.

Riding with the lights on

In Ontario, motorcycles have to ride with their lights powered on all the time. This has been legally mandated as a way of making the motorcycle much more visible to drivers of other vehicles.

When I replaced my Trek 520 with a Surly Long Haul Trucker, in preparation for my bicycle touring adventure around Lake Superior, my bicycle rims went from 700C to 26 making me purchase a new set of wheels.

As an avid Ice Biker and someone who enjoys the thought of one-day randonneuring, I had heard about a type of hub dynamo called the SON. This device has 26 magnets installed that are used to generate power with every turn of the front wheel where it is installed.

A concern with these types of devices is the amount of strength sucking drag that it introduces. It’s been mentioned elsewhere that the drag is the equivalent of climbing five vertical feet for every mile of horizontal travel. In my experience, it is an undetectable level of drag and is not worth worrying about.

Runtimes for a LED light bulb run into the tens of thousands of hours compared to the older type bulbs. This has the practical effect of making it possible to actually have constantly running lights on a bicycle with minimal impact on riding performance.

I decided to do just this for my ride around Lake Superior. During my rides around other lakes, I experienced an average of two or three dangerous vehicle manoeuvres each day. With the lights on going around Lake Superior, I only experienced three events in total leading me to believe that having running lights front and back that were on all the time made a real difference!

Another benefit of the SON hub is that it removes the need for battery management. Since I wasn’t worried about keeping batteries alive I was able to ride later on those nights when I wanted to do so. The lighting was vastly superior to all typical battery-powered systems commonly used. The only lighting system that produces more light would be a system designed for use trail riding on mountain bikes in the dark. This type of system is relatively expensive and the run times for the batteries would make it less useful for a bicycle tour.

While I originally picked up the SON hub as a luxury for bicycle touring, I have since found it to be wonderful for bicycle commuting as well. Its ability to give me great light, freedom from batteries and much higher visibility for other vehicles has led me to a strong desire to have one of these on all of my bikes.

I’ve recently discovered that there are also compatible lights that allow you to charge AA batteries from a dynamo hub while pedalling. This could have a dramatic impact on my ability to use electronic equipment without needing to stop somewhere for charging time. This is one option that I will be looking into in greater detail!

A dynamo hub is NOT something that’s absolutely required for a bicycle touring adventure. Now that I have one on my touring bicycle I absolutely intend to use it on all future tours. 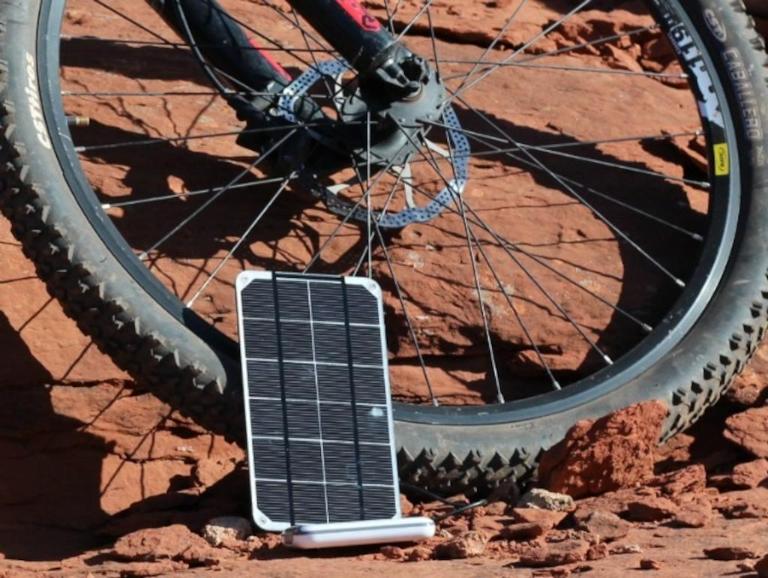 Electricity on a Bicycle Tour: How to Keep Your Electronics Charged